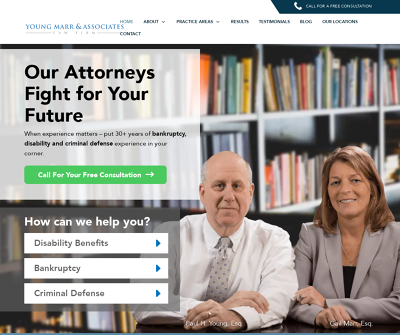 Young, Marr and Associates have proudly represented clients in both New Jersey and Pennsylvania for over 30 years. No matter how complicated the case our attorneys offer free case evaluations to help you truly understand the legal implications of your problem before moving forward. Weve worked with thousands of Bankruptcy, Criminal, DUI Cases, Social Security Disability, and Personal Injury clients throughout our legal history and are confident we can help.

Paul H. Young is the founding partner of Young, Marr and Associates. After starting his legal career at the Social Security Administration, he has been in private practice in Pennsylvania and New Jersey state and federal courts for over 30 years with a primary emphasis in representing bankruptcy, social security disability and long-term disability clients. Paul has helped represent 1000’s of claimants obtain social security benefits in multiple states, including Pennsylvania, New Jersey, Florida, California, South Carolina and New York.

He has also successfully handled over 10,000 consumer bankruptcy matters in Pennsylvania and New Jersey and has received numerous awards in both areas. He has taught bankruptcy at the college level and has lectured in both areas.


Gail Marr started her legal career as a district attorney at the Bucks County DA’s office. She has been in private practice in Pennsylvania and New Jersey state and federal courts for over 20 years, with an emphasis on criminal defense. She has handled well over 5000 cases and has received numerous awards in the area of criminal advocacy. She is a member of the prestigious American College of DUI Defense and is recognized throughout Bucks, Montgomery, Lehigh and Northampton counties as a tenacious litigator, who fights vigorously for her clients, who always receive her cell phone number. In addition to criminal defense, Gail has represented over 1000 claimants in receiving social security disability benefits. She also has participated in well 1000 bankruptcy cases and has also litigated divorce and custody matters.

Gail is a lifelong Pennsylvanian, currently residing in Perkasie with her husband. Gail is a proud mother of four children, with her son currently attending NCAA Champion Villanova University. She is also recently a proud grandmother. Gail is a proud graduate of Rutgers University and Rutgers Law School. Gail is an avid Philadelphia sports fan and other interests include Christian music and novels.