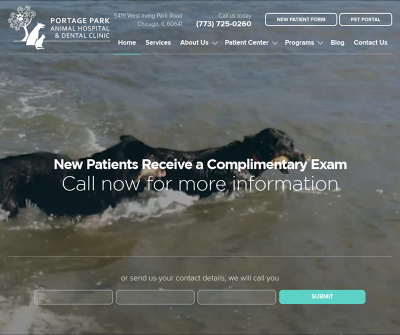 Portage Park Animal Hospital and Dental Clinic is proud to serve the Chicago IL area for everything pet related. We providing top quality veterinary care and treatment for your pet. Portage Park Animal Hospital (PPAH) has served pets in our community for more than 30 years. By providing the best in education, treatment and results, you and your family can be sure Portage Park Animal Hospital can keep your pet happy and healthy for many years to come. Our caring staff of veterinarians, state of the art hospital and commitment to quality pet care makes Portage Park your trusted source for all your pet’s needs. Whether you need pet vaccinations, animal teeth cleaning, or any other veterinarian service, our animal hospital offers the compassionate, knowledgeable care your pet needs. Our team of veterinarians and support staff works with you to make sure your pets get regular preventive care to keep them healthy, as well as more critical care when they are sick or injured. Our vet clinic will provide all the various types of care your pet may need over the course of their lifetime. We understand your pet is an important part of the family and deserves the same level of care you would expect from anyone else. This is why we treat each of our patients and their owners with the love and respect they should get. Your pet’s comfort is our top priority. With our expert staff, you can rest assured your pet’s health is in good hands.

After becoming an associate Veterinarian at Bone Animal Hospital in Chicago for one year, he managed an Animal Emergency Clinic in Indianapolis Indiana for 2 1/2 years before joining Portage Park Animal Hospital. Dr. Schrock’s special interests include pediatrics, geriatrics, dentistry and surgery.

Dr. Lenette L. Renier DiCiaula, DVM has been a part of the Portage Park Animal Hospital family since 1995. She is a 1994 graduate of the University of Illinois School of Veterinary Medicine. Dr. DiCiaula’s special interests include dentistry, laser surgery and internal medicine.

Prior to becoming a Veterinarian, Dr. DiCiaula was a high school Biology teacher at Good Counsel High School. Dr. DiCiaula also has her Bachelors and Masters of Science degrees from Loyola University in Chicago.

Dr. Tremlova joined our family in September 2005. She is a graduate of the University of Illinois College of Veterinary Medicine. Dr. Kate completed her undergraduate studies at Loyola University Chicago and has close ties to the city along with an appreciation for its architecture. She is an avid Illini fan, but cheers for the Chicago White Sox and Bears as well.

Dr. Tremlova was born in the Czech Republic, where her father is a practicing Veterinarian. She came to the United States as a little girl over 20 years ago with 2 suitcases, 4 boxes of toys, and boundless optimism. She is proud to be following in her father’s footsteps.

Dr. Melissa Tobin joined our practice in June of 2014. She graduated from the University of Illinois, College of Veterinary Medicine with honors. Dr. Tobin completed her undergraduate degree at the College of the Holy Cross in Worcester, Massachusetts prior to relocating to Chicago.

Dr. Caroline Wilde joined the Portage Park team in July 2014. She is a North Carolina native, who transplanted to Chicago in 2009. She completed her undergraduate studies at UNC Chapel Hill, and then graduated from NCSU College of Veterinary Medicine in 2003. In addition, after practicing for three years, she decided to pursue additional training and completed a rotating internship focusing on Internal and Emergency Medicine at the Veterinary Referral and Emergency Center in Norwalk, CT in 2007.

Dr. Vivek Beri joined our practice in December 2016. He grew up in the southwest suburbs of Chicago and attended the University of Illinois where he received his bachelor’s in Animal Sciences. He attended St. Matthews University in Grand Cayman where he earned his doctorate in veterinary medicine and completed his clinical rotations at Purdue University.


Dr. Robinette joined the Portage Park Animal Hospital family in 2017. Prior to that, she worked as a general practitioner and then completed a Small Animal Medicine and Surgery Internship in Hollywood, Florida. She spent the following year working as an emergency veterinarian.

Dr. Robinette graduated from the University of Florida with her DVM and a Bachelors of Science in Microbiology and Molecular Biology. Go Gators! Her professional interests include rehabilitation, internal medicine and emergency and critical care. She is currently finishing her Master of Public Health, as well as becoming certified in Canine Rehabilitation.