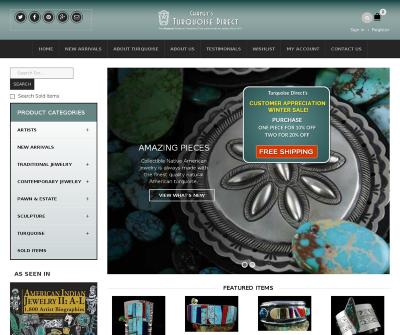 Turquoise Direct offers some of the best Native American jewelry that is created by famous artists like Darryl Dean Begay, Liz Wallace, Thomas Curtis and many others renowned jewelers. Shop the favorite designer designs of jewelry from their stores now!

We’ve been in this business for over 45 years. In 1972, John and Barbara Chaney founded Artesanos Trading Company in Corrales, New Mexico with the concept of purchasing only the highest quality American turquoise and trading with the best Navajo, Hopi, and Santo Domingo jewelers. In those days, they invested time and energy in to forging strong ties with the miners in the desert southwest – flying into the dirt strips of Nevada and Arizona to hand pick the best turquoise to trade with their artist friends. Trading the turquoise for fine gold and silver Indian jewelry, they sold to some of the best Indian Art galleries in the country including the Charles Eagle Plume Gallery in Estes Park, Colorado.

In the 1980s, Barbara and John founded the Tanner Chaney Gallery and, later, Native Gold, in Albuquerque’s Old Town. During this period, Indian County, a radio show highlighting cultural and historical Native American traditions and topics aired on local radio stations in Albuquerque and Santa Fe, New Mexico, written and hosted by Barbara Chaney. In the mid-1990’s the Chaneys sold their galleries and semi-retired, although they continued to work with Nevada miners and deal rough and cut turquoise to manufacturing houses and their Native American friends.