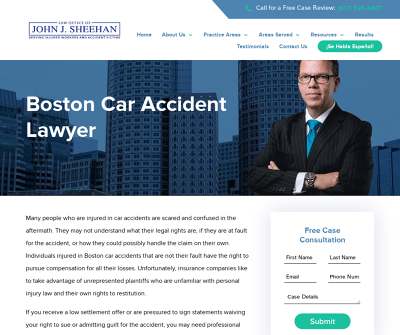 Premier car accident lawyers in Boston, MA. If you were in an accident because of someone who was texting and driving, drinking and driving, or any other negligent action, call us today for a free consultation. Many people who are injured in car accidents are scared and confused in the aftermath. They may not understand what their legal rights are if they are at fault for the accident, or how they could possibly handle the claim on their own. Individuals injured in Boston car accidents that are not their fault have the right to pursue compensation for all their losses. Unfortunately, insurance companies like to take advantage of unrepresented plaintiffs who are unfamiliar with personal injury law and their own rights to restitution.

If you receive a low settlement offer or are pressured to sign statements waiving your right to sue or admitting guilt for the accident, you may need professional legal representation for your personal injury case. The dedicated Boston car accident lawyers at the Law Office of John J. Sheehan could work on your behalf to protect your rights and fight for the compensation you deserve. To set up a free legal consultation on your car accident case, call our car accident attorneys in Boston today at (617) 295-7910.

Personal injury and accident lawyers in Boston are dedicated to helping those who were injured or harmed due to the negligence of a third party. Learn more by calling today. After being involved in an accident triggered by severe conditions, the person should call 911. The police and emergency crews can respond and, if necessary, transport them to the nearest hospital, where they can be further evaluated and treated. Individuals should, if possible, take photographs of the scene, the vehicles, and the conditions of the road. They should get the license and registration information from the other drivers involved. They should also identify any witnesses to the accident and get their names and phone number.

The typical process for requesting evidence in a car accident case in Boston is to send a written request for the police report to the local or state police department to identify the owner of the vehicle involved and the insurance company.

Usually, a person involved in a car accident has information that was exchanged with the other driver. Sometimes, the police obtain information from each driver such as the following:

*The make, model, and year of the vehicle
*The registration information for the vehicles
*License plate numbers
*Driver’s license numbers
*Each driver’s name, address

With that information, a lawyer could contact the insurance company for the other vehicle to determine whether a claim was reported and set up. They obtain the claim number and the name and contact information of the insurance adjuster. The lawyer sends a letter of representation to notify the insurance company that they are representing the injured person involved in the car accident and a claim for personal injury is going to be made. The other process of collecting information could be obtaining the owner’s information or their driving history from the Registry of Motor Vehicles.


What Are My Legal Rights as a Boston Car Accident Victim?

Under state law, there can never be a situation where a car accident is no one’s fault. Because of this, the first thing to do when considering a claim is to determine which driver carries legal liability—or in other words, is “at fault”—for the accident.

The simplest way to do this is to determine if the other driver was negligent. Negligence is a legal concept and cause of action that allows individuals injured in accidents to demand compensation for their injuries. If one party has a legal duty to watch out for the wellbeing of another that they fail to uphold, anyone who is injured as a result can demand compensation.

In-car accident cases, each driver has a duty to protect all other people they may encounter while on the road. This extends to other drivers, passengers, and pedestrians. To succeed with a civil lawsuit, an injured person would need to introduce evidence that the defendant driver failed in this duty.

Often, the duties that drivers owe pedestrians, cyclists, and other drivers come from safe driving standards as well as actual traffic laws. For instance, it is usually a common safe-driving practice that drivers keep both hands on the wheel and both eyes on the road, and failing to do so could give a driver lower control over the car and lead to a crash. Traffic laws also place specific restrictions on driving habits, such as speed limits, bans on drunk driving, and prohibitions against tailgating.

To prove the defendant was at fault, you need to supply evidence. This could include evidence that the defendant was speeding, ignored a stop sign, or was texting while driving. Your testimony and the testimony of other witnesses can help build a clear case, as can photos of the intersection and the damages to the vehicles involved. Our Boston car accident attorney can help clients to gather this essential evidence and incorporate it into a claim alleging negligence.

Ultimately, to win your case, you will need to prove to the jury that the defendant was at fault “by a preponderance of the evidence.” This is a lower standard compared to the “beyond a reasonable doubt” standard used in criminal cases and typically means that you only need to show it is “more likely than not” that your claim is true. In practice, you might actually file your case against multiple drivers, and the court can assign partial blame to each driver when determining who was at fault, allowing you to collect a share of the damages from each at-fault driver.

Even in cases where a defendant is clearly responsible for the accident, a car crash claim may fail if the plaintiff does not act in time. There is a strict time limit of three years for a plaintiff to file a case for personal injury under Massachusetts General Law, Chapter 260 § 2A. The statute of limitations only sets the time before you need to file your case. This by no means implies that you need to file your case, go to trial, and have a jury decide your claim before three years is up, just that you need to get your case in the door.

If a plaintiff misses this deadline, their case is likely to fail. Defendants are allowed to file a motion to dismiss a case if it was filed too late after the statute of limitations has expired. Courts can also do this “sua sponte” and toss a case on their own if they see that it was filed too late. Filing a case late can also mean that evidence will have more time to go missing or be destroyed, and it gives witnesses more time to forget what happened. This can all hurt your case even if it ultimately filed in under three years without an automatic dismissal, so it is vital to talk to a Boston personal injury lawyer as soon as possible instead of waiting.

Insurance companies are aware of the statute of limitations and will often refuse to negotiate a settlement if the accident happened more than three years ago. They know that, ultimately, you have no other recourse if you cannot take the case to court, so they usually will not continue to work toward paying cases that are filed too late. This is another reason that it is important to file your case quickly: filing a lawsuit puts additional pressure on an insurance company to settle for a fair amount.