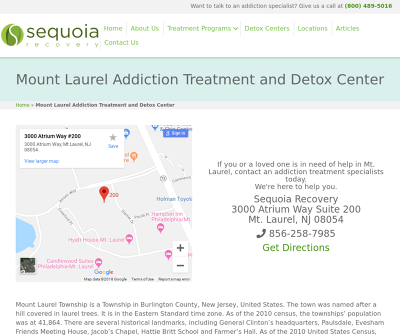 If you or a loved one is in need of help in Mt. Laurel, contact an addiction treatment specialists today.
We''re here to help you.Our Mission
Our number one priority is to provide individualized care for all of our clients. It is our goal to provide the proper care to help clients overcome their addiction. We provide a range of alcohol and drug recovery programs at the drug rehab centers in our network along with a clinically managed detox and full rehabilitation treatment plan.

Mount Laurel Township is a Township in Burlington County, New Jersey, United States. The town was named after a hill covered in laurel trees. It is in the Eastern Standard time zone. As of the 2010 census, the townshipsu2019 population was at 41,864. There are several historical landmarks, including General Clintonu2019s headquarters, Paulsdale, Evesham Friends Meeting House, Jacobu2019s Chapel, Hattie Britt School and Farmeru2019s Hall. As of the 2010 United States Census, the racial makeup of the township was 79.42% Caucasian, 9.70% Black or African American, 0.16% Native American, 7.26% Asian, 0.04% Pacific Islander and 4.56% are Hispanic. As of May 2017, there were 76,509 treatment admissions to the New Jersey Department of Human Services, Division of Mental Health and Addiction Services by substance abuse treatment providers.

Burlington County has not been immune to the ongoing opioid epidemic that has been taking hold of people of all ages across the region, state, and country. According to the Burlington County Prosecutoru2019s Office in the year of 2016, at least 83 people died from illicit drug overdoses. 2017 was even deadlier, in the first 6 months, 82 people lost their lives to overdose in the county. Authorities state that they have been seeing a more lethal batch of drugs hit the streetsu2013 primarily heroin laced with fentanyl, which is 50 times more potent than heroin alone.