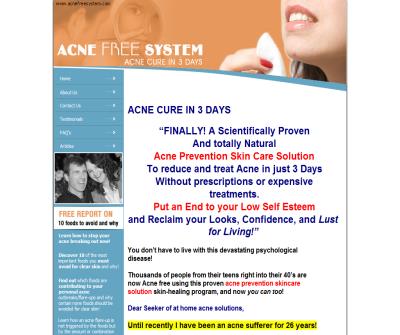 All the different sites putting up articles perturb me about acne myths; many of their submissions are very relevant and valid.

The one acne myth that drives me to distraction though, is the food myth,

The sites advocating these myths interestingly enough; are selling products that treat the symptoms of acne like medicated face washes, creams and certain medications such as antibiotics.

Dairy consumption is definitely connected to acne, why?

Because independent scientists can show that milk comes from a pregnant cow or one that has a calf (no surprises there) and the milk is loaded with progesterone, 5-alpha reduced steroids, and other steroid hormones plus iodine; which when broken down by the body results in dihydrotestestosterone (DHT) which turns on the oil making cells in the body.

So with that knowledge you can pretty much rule out all dairy products in your fight to reduce acne, people would argueâ€ Oh but I need milk and dairy for my calcium intakeâ€ poppycock! Show me another living creature on this planet that consumes milk after weaning! Let alone milk from another species! Take the cow for instance, a huge animal with large dense bones, how much milk does a cow drink? None! Does a cow or an elephant for that matter suffer from calcium deficiency? No!

It could be argued that milk does not contribute to acne; so i will say itâ€™s the hormones in it and the iodine that do!

If you are partial to drinking milk and you suffer from acne; try drinking an alternative like Soya milk or oat milk.

There are many more foods or to put it another way; substances/chemicals/molecules in food that most definitely do contribute to acne and an acne breakout/flare-up.

In my mind if people prone to weight gain eat certain foods and gain a few pounds, then its perfectly conceivable for a person who is prone to acne, when eating certain foods will have an acne outbreak.