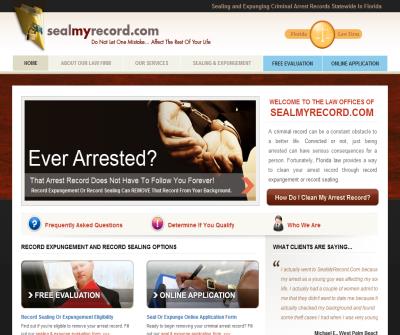 Expungement of Criminal Records in Florida

Expungement and Sealing in Florida

Welcome to the article written by Nicolas Babinsky, Esq. .His office specializes in sealing or expunction of your criminal arrest records so they don't come up on criminal background checks. Though they are located in Miami, Florida, they represent clients not only Miami Dade, Broward, and Palm Beach Counties, but ALL counties statewide in Florida!

If ever arrested, you may now realize that the criminal arrest record (police and court) arising from your arrest can cause you problems in employment, housing, and other situations when a Florida criminal background check is done. Even if you received a withhold of adjudication and were not convicted, the criminal record may still be causing you problems. If you qualify, sealing or expunging your criminal arrest (police and court) records is a low cost way of improving your life. Once the sealing or expungement of your Florida criminal record is granted by the court, the withhold of adjudication or dismissal of your felony, misdemeanor, or other criminal charge will no longer be available as a public record as it will be sealed or expunged. Also, if you seal or expunge the Florida criminal record, you gain the LEGAL right to deny or fail to acknowledge anything to do with the arrest and the legal proceedings from the case itself. For more information on seal or expunge, please review our sealing and expungement page. Do you meet the basic requirements?  See below.

Do you qualify for record sealing or expungement in Florida? These are the basic requirements:

If you answered NO to the questions above, you likely will qualify to have your record sealed or expunged. If you took a plea and received a withhold of adjudications SOME cases can't be sealed but most can. If you were arrested and the charges were dismissed, dropped, never filed, or you were found not guilty, then you likely will qualify for relief.