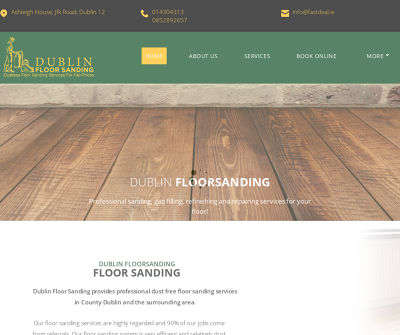 Wood is hygroscopic. Basically, when there the relative humidity of the surrounding environment is high, the wood will absorb moisture right out of the air. Conversely, when the relative humidity is low, the wood will lose moisture, releasing it into the air. This is a natural, cyclic process that occurs. Its moisture content (MC) needs to be properly managed for it to remain in optimal condition- as it affects both its structural integrity and aesthetic appeal. Trouble begins when there are excessive changes in the MC. Here is a look at scenarios that can cause this:

Water on or underneath the floor
When there is moisture on the floor- which can range anywhere from the occasional drink spills that aren’t cleaned up in time, to cases of all-out flooding due to damaged pipework in the house; or when water gets between the subfloor and the wood boards, and the issue is not resolved, this will result in problems being created for the wood. Leaking appliances, rising damp through a perforated vapour barrier, to cases where there is moisture from the concrete subfloor which hadn’t drained completely after installing of the wood boards on it. Sometimes the terrain itself an issue, especially for those locations where the runoff does not move away from the foundation, as this can be a contributing factor to the groundwater intruding into the building.

Fluctuating humidity levels
This focuses on the atmospheric conditions in the building. During those humid months, the wood boards will actively absorb moisture from the air, causing them to expand.

Installation before proper acclimation
Right off the bat, the wood floorboards need to be acclimated to the temperature and humidity conditions of the room before they are installed. Basically, one is meant to store them in an area with similar conditions, where they will then absorb or lose moisture until they stabilize. After this, the expansion or contraction that follows will be minimal, with the day-to-day fluctuations of the environmental conditions. If the floor isn’t allowed to properly acclimate before it is installed, the expansion or contraction that occurs after installation will be drastic, which can damage its structure.

Improper installation
This is a direct result of mistakes being made in the installation process. Here, the final setup gets rigid to a point that it doesn’t allow for normal expansion or contraction of the boards as they absorb or lose moisture accordingly, putting a strain on the wood. For instance, installing the planks with fasteners that are of the wrong size- or not even using enough fasters to begin with, will be problematic. If there aren’t sufficient expansion gaps around the floor, buckling can occur. Installing the boards over a concrete subfloor without putting in place a vapour barrier will increase the amount of moisture that the wood absorbs. In other cases, the installation is carried out when the subfloor was still too wet.

Signs Of Moisture Damage
How do you know that your floor has been affected? Here are common signs to watch out for:
Cracks in between the boards
During winter, heating up the rooms is common. While this creates a warmer space to live or work in, it causes the relative humidity levels to drop. This leads to the floorboards shrinking, and spaces will appear in between the boards. During the hot and humid summer months, the reverse happens, with the wood absorbing moisture and expanding, causing the spaces to close up. These changes are normal and seasonal. Trouble comes when the cracks become permanent, as this will be an indication of structural change in the wood itself.

Cupped boards
Here, the moisture imbalance occurs through the thickness of the wood, causing the edges of the affected plank to be higher than the centre. The wood will expand, with more wetness being at the bottom of the board compared to the top surface, which will dry out faster compared to the bottom. As more expansion occurs, there can be compression between the adjacent boards as the wood tissue gets crushed together. This results in deformation of the boards at their edges.

Crowning
This is also caused by moisture imbalance in sections of the wood, but in this case, it leads to the centre of the planks being higher than the edges. It’s basically the opposite of cupped floors. For instance, when water is allowed to stand on the surface of the floor for a long time, then it saturates the affected sections, resulting in the crowning. It also occurs when the floor sanding on previously cupped floorboards is carried out before the installation has been allowed to acclimate back to normal. This is why sufficient drying time should be allowed before the floor sanding is carried out.

Buckled flooring
By the time floors are buckling, then there has been a drastic change in the moisture levels of the installation. Here, the floor boards actually pull up from the subfloor itself. The lifting can even be several inches in sections of the flooring. Floors rarely get to this point. In fact, it is mainly witnessed in cases such as flooding that has occurred and the wood has been under water for a long time period. Here, the cause of the damage also first needs to be resolved. After the cause of flooring has been resolved and the standing water got rid of, then the affected boards will need to be removed from the floor, allowing air to circulate below and across the affected region. The boards are then allowed to acclimate before repairs are made.
To avoid these problems, focus is on keeping moisture away from the wood. This ranges from cleaning up spills as soon as possible, aspects such as damp mopping as opposed to working on your floor with mops which are soaking wet. The moment you notice leaks with the plumbing system, arrangements should be made to address them quickly, fixing the source of the leak, and then cleaning up the water that has flooded the floor. The longer that it is allowed to remain unresolved, the more extensive the damage will be to your installation.