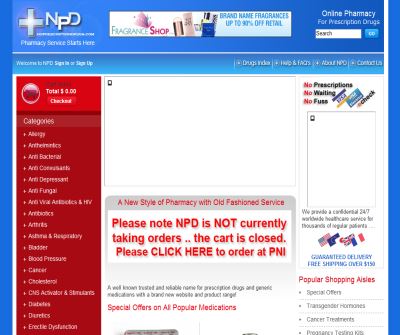 Prescription Drugs: the facts the FDA don't address.. but who is paying the price?

It is all very well for the FDA to crack down on internet pharmacies (and rightly so on fraudsters) but millions of uninsured and underinsured Americans struggle to afford the medicines they need, even forgoing medically necessary drugs when prices are out of reach. When discussing the high cost of prescription drugs, politicians often focus on the financial burden carried by senior citizens. Unfortunately, as this report shows, high prescription drug prices are a problem for Americans of all ages, particularly for the uninsured.

Today, nearly 46 million Americans under the age of 65 lack health insurance, and millions more with insurance lack prescription drug coverage. Young adults from 19 to 34 years old are the fastest growing group of uninsured, accounting for 40 percent of the total.

At the same time, prescription drug prices are skyrocketing in the United States, rising much faster than the rate of inflation. In 2005, Americans spent $252 billion on prescription drugs.

The federal government uses its buying power to negotiate lower prices for the drugs it purchases for its beneficiaries, such as veterans, government employees and retirees. Uninsured consumers, with no one to negotiate on their behalf, pay full price for their medicationsâ€”if they are able to afford them at all.

During the spring of 2006, researchers from the state Public Interest Research Groups (PIRGs) posed as uninsured customers and surveyed by phone hundreds of pharmacies in 35 cities across the country to determine how much uninsured consumers are paying for 10 prescription drugs commonly used by adults under age 65. We then compared these prices with the prices the pharmaceutical companies charge the federal government; with prices at a Canadian pharmacy; and with the results of a similar survey we completed in 2004. Key findings include:

NATIONAL FINDINGS
â€¢ Uninsured Americans pay 60 percent more on average than what the federal government pays for the prescription drugs we surveyed.

â€¢ Uninsured Americans pay twice as much for drugs purchased at local pharmacies as they would pay if they purchased the same drugs from a Canadian pharmacy.

â€¢ Compared with our 2004 survey, the cost of the nine prescription drugs we surveyed increased by 11 percent, 81 percent faster than the general rate of inflation between 2004 and 2006.

Increase the Availability of Generic Drugs
Lower-cost generic drugs could save Medicare, Medicaid and consumers billions of dollars. The state PIRGs support increasing the Food and Drug Administrationâ€™s budget devoted to approving generic drug applications in order to ease the substantial backlog. We also support closing loopholes that allow drug makers to hold on to their patents and slow the introduction of generic drugs to the market.

Establish Prescription Drug-Buying Pools
The state PIRGs support creating prescription drug-buying pools at the state and multi-state level to allow individuals, businesses and the government to use their combined buying power to negotiate lower drug prices.

End Secret Deals with Drug Makers
The state PIRGs support efforts to increase transparency and accountability for Pharmacy Benefit Managers (PBMs), which negotiate deals with drug makers on behalf of insurers, state health programs, and large businesses. These deals are shrouded in secrecy and have led to lawsuits alleging that PBMs fail to act in their clientsâ€™ best fiduciary interest.

Legalize Prescription Drug Importation
The state PIRGs support legalizing prescription drug importation as an interim solution for the millions of uninsured consumers who cannot afford to purchase their medications in the United States. A good place to safely start obtaining or personally importing your prescription medications from is at NPD right here
7/11/2006 Federation of Public Interest Research Groups

and.. Los Angeles Times columnist David Lazarus writes ".. until the U.S. can extend health coverage to everyone and limit drug prices to reasonable levels, many Americans will have no choice but to seek the best possible deal for their meds, and this will often require them to look beyond our borders, via the Internet. Lawmakers need to step carefully in any crackdown on Internet drug sales because, simply put, we can't punish people for trying to make up for shortfalls of the U.S. health care system."

The Law! .. In the case of the USA (and indeed most Countries) the FDA (and other Government authorities) will allow you to legally import up to three months supply of a medication providing it is for your personal usage and not for resale.